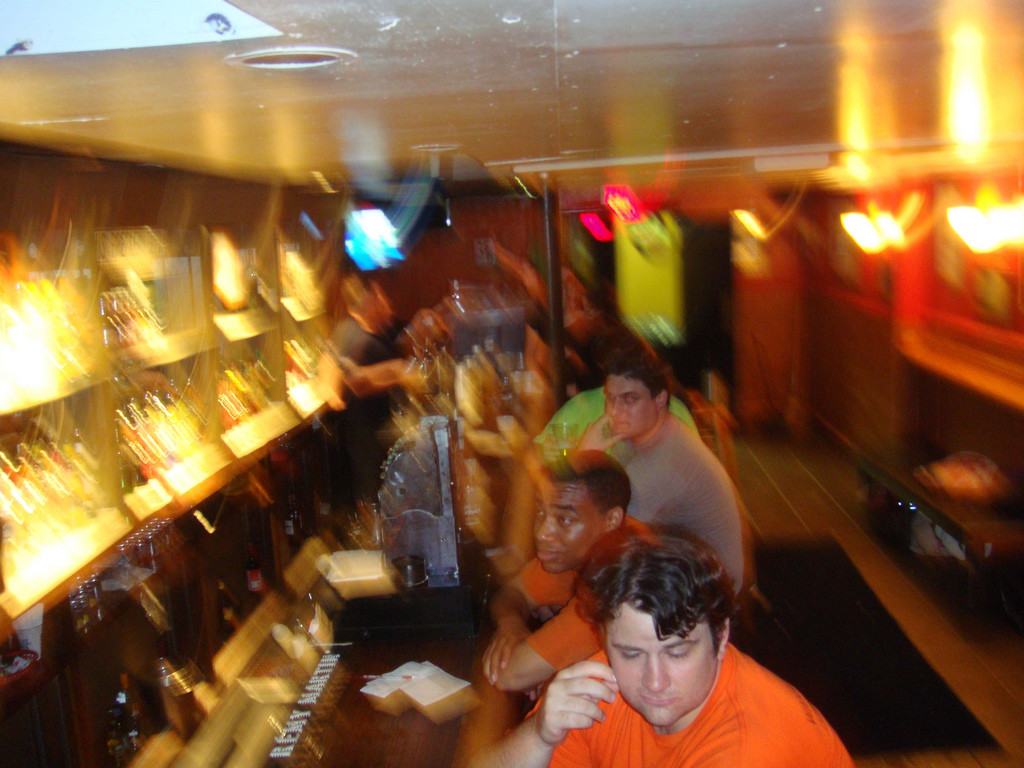 No one warns you about drinking in your early twenties.

No one tells you that after college, the hangovers will hurt exponentially more each morning. That precious drinking time will be wasted away at tab-splitting group brunches & co-worker happy hours. That the grim specter of adulthood will soak into your once-young bones like so many skunked light beers into a frat house doormat.

Or at least, no one warned me. And so I found myself on Kentucky Derby Day 2012, cantilevering my torso out an open window six stories above street-level Manhattan, desperately dragging a Marlboro Red as fast as my drunk lungs would allow. We’ve gotta win this round, the nicotine whispered into the empty chamber of my brain. Keep smoking. Six inches away, my roommate’s face was sucking back its own 100 and peering at me with its vacant eyes. Henry was looking jaundice-green. The game was mine for the taking.

There’s a drinking game you’ve never heard of called cigarette flip cup. As far as I know, I am its pioneering visionary. It’s the sort of game a gleeful white imbecile invents before his body has sent him enough emergency warnings — in the form of bloody puke, days-long dehydration headaches, blurred vision, and the like — to alert him that his youth is running out. It’s known to leave players knock-kneed & nauseous, sprawled with their own vomit on tile floors of strangers’ bathrooms. For these reasons and more, cigarette flip cup is strongly endorsed by this author for use as a party-ender and/or self-discovery method.

To play, simply combine two things college kids think they’re good at, but only might be: drinking, and smoking cigarettes. You’ll need an open window, beer, cigarettes, and some teammates. It’s recommended that you do several lines of bad cocaine beforehand, but this is optional. I prefer a gym-volleyball-style rotational roster, with your strongest dri— oops. That’s just me talking strategy already. I’m way ahead of myself.

You and me? We’ve gotta begin at the beginning.

Like most existential crises, and virtually all alcohol-related catastrophes, this one is built squarely on the foundations of something that’s meant to be “fun”. In our case: flip cup! 90% of this game is exactly the same as all the one that’s been played in America’s halls of higher learning for decades. If you don’t know how to play… wait, seriously? Where’d you go to college, Haverford? Jokes! Loosen up, you Quaker fucks!

So yeah, there’s nothing to it, really. In fact, on its own, the game is sort of boring. Invariably, your team will fall behind, or spring ahead, and you will feel correspondingly dejected or elated. But guess what? There’s another round coming up. And another after that. And pretty soon, you’ll lose interest and start watching a TV or a girl across the table, only to be startled from your listless liquor daze by your teammates. It’s your turn, man! Hurry the fuck up and FLIP!

This is flip cup’s folly: its mind-numbing cycles hypnotize you for far longer than they should. Some people (I am one) enjoy it as an opportunity to ruthlessly trash-talk their opponents while they flip, but even those returns diminish. Down, up, down, drink. The tedium marches ever forward.

When you’re barely 22, you can still drink like Rip Torn without looking like him the next day. It’s not clear yet that it’s OK to party at anything less than full-speed, so boredom is tantamount to blasphemy at a boozy altar. You don’t realize that undergrad’s glorious bacchanals are best left behind, as they simply won’t have room to breathe in the barely-furnished apartment of your young adulthood. You don’t understand what will happen if you keep your liver pegged at its redline.

Or at least, I didn’t. So earlier that morning, I shirtlessly stirred an icy slurry of bottom-shelf bourbon & wilted mint leaves in a repurposed IKEA bin. Juleps! Half-naked in the kitchen of a barely-furnished apartment I shared with 7 roommates in downtown Manhattan, I envisioned a brilliant addendum that’d transform flip cup from tedious to thrilling.

In the conventional game, the stakes are low. Your Solo cup is filled with maybe a few gulps of beer. Sure, you drink it quickly, but there’s only so much damage you can do before your team loses or the table departs for more gainful drinking opportunities. But when you add a suffix of cigarettes? Now, the game has gravitas.

It’s now also got an extra step, so let’s talk logistics. The flip cup game should proceed per normal, until play reaches the “anchor” (the last turn on the team.) After downing his beer and successfully flipping his cup, the anchor must — in one fell swoop of sudsy fluidity — light a cigarette, duck his head out the open window, and smoke it down to its filter.

But no pensive puffing out there! Time is of the essence. Once he’s lightning-dosed his bloodstream with nicotine, he will tuck back inside to chug & flip a final cup of beer, ready & waiting thanks to a teammate. Win or lose, he is a conquering hero, and should rotate to the far end of the table so his entire team stands between him and his next tobacco-laced round.

One shirt and a few hours later, I was on my way back from the bodega with $35 worth of cigarettes (in some parts of the country, that’d mean an entire carton, but it totalled up to three packs in price-gouged Manhattan), pontificating. Cigarette flip cup shouldn’t be reasonable, I exhorted. It should shock & awe. It must force the issue. It will connect us, then divide us, then connect us again.

That’s all a lie, of course. When you’re 22, your instincts self-aggrandize in silence. There’s no articulate higher purpose. For four formative years, every watt of brainpower is spent imagining faster, funnier, and more novel ways to ingest substances. Your creative force is entrenched. It won’t just disband peaceably just because you received a diploma, and moved away from campus, and bought sensible shoes.

Cigarette flip cup! The first contest of its kind in America, probably! Do you have a lighter?

Inevitably, one of the Fairfield girls will have a Bic (“I only smoke when I drink! LYLAS!”) Grab it, then line teams up across from one another at a long table positioned perpendicular to the window. The anchors are the ones facing each other closest to the open frame. They’ll be smoking, so give them the cigarettes & lighter. Now’s the time to talk some shit. Your coworker is going to Ultra this year. Promise that you will join him. Hoist your Solo cup across the table. Match up, man! Your stomach is ready. The horses are in the gates. The fun is on.

You can’t hit rock bottom when you’re young, employed, and free of addiction. It’s against the law. Or at least, unlikely. But when you are all those things, you hit something else: the creeping irrelevance of growing up. And so you will occasionally find yourself competitively smoking Marlboros over a precipice, or drunkenly passed out on subway platforms in Queens, or snorting a friend-of-a-friend’s Adderall at some loft party and not even caring how long its artificial flame will keep your synapses firing once your brain has become the empty chamber.

You’ll wonder where the punchline is, and when these things will make you happy & whole. And with every reflux burp after every whiskey shot, you’ll chase echoes of your adolescence farther into the mundane labyrinth of adulthood.

This story originally appeared on Medium.